I got this bootleg on cd-R years ago, labelled "manchester apollo 1982"and have no clue about the original source - but in those days, converting live gigs to mp3 and re-burning the mp3s to cd-r was not a common habit ; so I'm pretty sure the cd-R was copied from an
"original tape" without lossy conversion. On the other hand, I have no idea of the "generation" of the tape - master recording ? Copy ? Copy of a copy ? Who knows.The fact is, this is not a 1982 gig at all ; 1981 is the correct year, and on the CD the first and second half of the gig had been swapped
(according to the starfarer.net setlists). So there's a lot of probability this is a copy of a copy, with sides A and B of the original tape confused.
The cd version had some old "earth calling" version added at the beginning of track one, I don't know why ; I removed that (I"m pretty sure it's a common version circa 72, maybe at Potters bar, and it sure doesn't belong to a 1982 gig)
and did a (slight) bit of mastering. I also put the songs in correct order. This may not be the best HW bootleg ever, but it can be listened to with some pleasure, especially the rather un-conventional version of "Golden Void". Enjoy ! 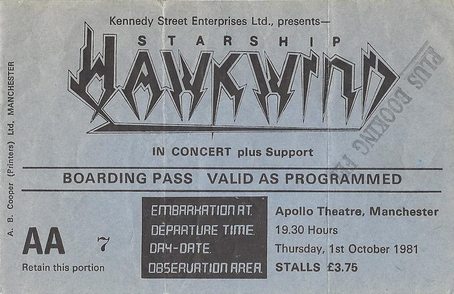 remastering info : using "original" flac files converted to wav, (there was no lineage included in the package I got, so I hope there was no mp3 conversion somewhere along the way...) I mainly added level, tried to reduce the tape hiss, and did a bit of stereo imaging. Then reconverted the whole thing to flac.
Don't expect no miracles, tho.

artwork : included, but to be honest, it's not the best piece of bootleg artwork I ever saw. I slightly re-edited the tracklist (joining choose your masks and battle sequence, and having the whole encore as one track), so the one featured on the artwork isn't really accurate..

The trouble with 1985 bootlegs is the way you can't avoid comparing these with the Live Chronicles official record. Most songs are played quite exactly the same, but with a better sound on the official one (which is no surprise indeed) ; so there's only a little intereste to be found on most of these records. This one falls into that kind, with most of the stuff being just ear-bleeding
versions of absolute live classics... But there are some highlights nonetheless : different narrations and intros (moonglum, for instance, has a nice synth intro, almost standing as a track of its own), sometimes different sounds used (on Choose Your Masks/Fight sequence, for instance, the analog synths sound a bit different, and you can also note a "Hall of the mountain king" theme inclusion on guitar) ; a full version of Brainstorm ; and, most interestingly, the encore is here included as a full, with a nice medley of classic Hawkwind songs (I chose to have it appear here as one track instead of cutting it into little bits, which made no sens IMO, but I'll understand if you're not happy with that - any audio editor can be used to re-edit following your own tastes !).
In the end, if you're a hardcore Hawkwind completist, this is worth a listen. If you're not, get yourself the Live Chronicles record !

Nice 76 bootleg, with a rather good sound ; contains an early version of Spirit Of The Age (with different lyrics) and Damnation Alley (with different
structure and a quite different drumming). Also to be noted are :
- the inclusion of "the right stuff" lyrics on Brainstorm
- a beautiful synth intro to "back on the streets"
- a fantastic jam at the end of Magnu

Not to be forgotten is the beautiful artwork using Hanes Bok illustrations from US sci-fi pulps - infinite thanks to the guy who designed it. I'm fed up with the post-hippie photoshoped flashy colors nonsense that is coined "artwork" for many live HW recordings...

The original files were surprisingly clean (no tape hiss), so the remastering only really adds some loudness. But 70's Hawkwind stuff must be LOUD, as far as I'm concerned !

Why two tracks only from this gig ?
Well, here's my review of the recording, that may explain why :

If you still want to hear the full show... Well, it's quite easy to find on soulseek, user hawk69.

This one exists under many forms : as commercial bootleg cd ("Kings of speed, lords of light"), as part of a two gigs set known as "A flight of steel eagles", and as many mp3 sets - some of them still claiming this is a Detroit gig ; it is not.

Anyway, most versions to be found on the internet (excerpt for an excellent .flac version you can get on Pirate Bay) are VERY bad mp3 conversions, so here's a slightly remastered, hi-quality conversion version of this cool gig, with some notes added and several versions of the artwork.

(By the way, the instrumental introduction to Levitation, which is not identified generally, appears to be "A Day", originally by Dave Brock & The Agents Of Chaos.)
Publié par vx à 06:06 2 commentaires:

Second set for this 1981 Hammersmith pair ; see http://morelivehawkwindstuff.blogspot.com/2010/10/hammersmith-odeon-21st-oct-1981.html , as there are only minor differences between the two gigs